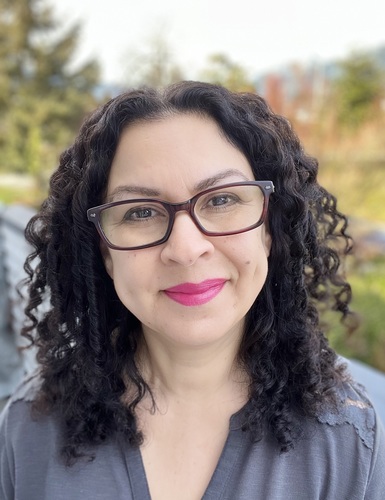 Neesha is passionate about education and social justice, and her dedication to the cause of eradicating systemic racism is what brought her to volunteer with NSRJ. She is one of the founding members of the Equity Audit Committee.

The multiracial daughter of a Ugandan-born Indian father and a Caribbean mother of European, African, and Indigenous descent, Neesha was born in London, England. Her parents met at a “Commonwealth Tea” in the 60s when interracial relationships were still a rarity. She and her family immigrated to BC when she was 5, and she grew up in the lower mainland during a time when the assimilative racism of colourblind ideology was the norm.

A public school teacher for almost 30 years, Neesha is now an online course developer and Life Coach whose practice is rooted in equity, racial justice, and ACT (Acceptance and Commitment Therapy). She also volunteers with Moms Against Racism Canada and is a member of Women Transforming Cities.

Most importantly, Neesha is a mother to two girls who she wants to see growing up in a more equitable and just world.